The Trouble with Roses. 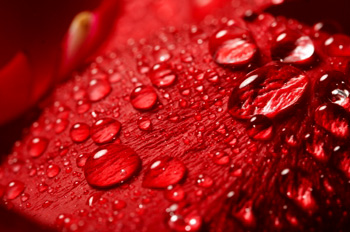 Used to be it hurt a little more, getting roses for the one you love.

That paper-wrapped bundle of long-stems was hard to get - it represented the spoils of a heroic quest. This was back before you could get flowers at the grocery store. Maybe five years ago. Come Valentine's Day, you had to leave the beaten trail after work. Maybe you weren't riding a horse deep into a dark forest, battling thorns and foxes and wolves, but you at least had to get off at an unfamiliar bus stop.

You remember the places we went back in the age of florists - quaint, soulful shops tucked away in dingy storefronts or alleys between the taller office buildings. You probably still have one in your city, somewhere.

As the sun set on Valentine's Day, and the evening rush hour bloomed around you, you'd step out of traffic, turn down an odd alley. You might find yourself meandering down one of the quieter streets, stepping through jets of sewer steam and approaching a glass-fronted shop whose windows, this night, were fogged.

There beneath a single streetlight you might join a row of guys (mostly guys) in the street outside the place. You'd join the line, shuffling quietly toward the open door. I always felt out of my element, passing through those doors. Like this was somehow the domain of women. Or maybe like a lapsed Catholic showing up each year for the Christmas Mass, I felt as though I had somehow sinned being away a whole year.

Step inside, into the light. You are walking, now, on rubber mats, slick with water. Fallen stems, green and broken beneath your boots. Breathe deep: ferns.

As a dedicated lover, I never stopped at the counter. Instead I fought my way back to the big glass cooler to select my own roses from the buckets. I favored shops that allowed this. What kind of gift is it, really, if the pretty girl behind the counter chooses the flowers for you? I'd quickly, perhaps sheepishly, point to the blooms I wanted - the ones worthy of my love - and the girl would hold open the big glass door with one hand. With her other hand she'd pluck each rose from its bucket - thorny green stem glistening - and make it mine.

The sun would sink lower. I'd feel the temperature dropping as each buyer rushed out into the night clutching his own prize bouquet. Buses growled away down the street.

Once I'd chosen the twelve most perfect stems left in the shop, it was time to start saying "yes" to her suggestions. Let her tuck a bit of Queen Anne's Lace in there. Or whatever that was. Each year there was something new. Greens. A word I'd thought meant salad.

Let her wrap them in tissue paper. She'd seal it with an inch of tape, while you chose a tiny card from the wire rack on the counter. There were pens there. You could write your note while she rings you up.

You pull four twenties from your wallet, smooth them flat and she takes them. You receive a handful of coins in return.

Now the line out the door is gone. The roses in the cooler are almost gone too. Some of the florists are leaning back against the cooler. Sighing from their big day.

Clutching your bouquet in both fists, brandishing it like a triumphant knight, you run out onto the sidewalk. That's your bus pulling up to the corner. Jump aboard, feel the doors snap shut behind you. Rush toward the back looking for a seat. Finding nothing, you stand, dangling by one fist from a silver rail.

The bus shifts beneath you, groaning around corners, and re-emerges from the floral alley into the ordinary city. The buslights blaze as the sky fades, and now all you can see in the windows are the reflected faces of the other riders.

Standing there swaying over everyone, you clutch your fragrant prize, try to lose yourself in the rhythm of traffic. But you can't help but wonder if you are feeling the envious eyes of the girl in the row behind you.

And then you're home. And you rush in the door, hiding the roses behind you. But their fragrance has already betrayed you. Grab a vase from the high cabinet and fill it with water at the sink. Like an alchemist or sorcerer, you tear the corner off that packet of flower food, sprinkle powder it into clear water, swirl twice, and slide the stems in. The whole house glows. She is home, too.

Maybe now there's a florist in your neighborhood. Not mine, anymore.

This is the age of grocery stores. "Red roses," $19 a dozen, pre-wrapped in loud, clear plastic. $19 a dozen between the hot dog buns and the video rental vending machine. There's a "florist" counter, high above the floor, but no one works there. No one ever works there. You grab your bunch from the big black bucket, grab a bottle of wine too. At the register, you slide your card and five minutes later you're back on the street. Walking home, you peel the barcode off the loud plastic wrapper, roll the sticker between your thumb and forefinger.

When you get home you discover that she has been to the grocery store too. Sweet of her, just like it was of you. Same store, same price, same roses. Same exact flowers, each one exactly the same.

She peeled the barcode off hers, too. You laugh.

You love her just as much as you did when you used to ride that strange bus.

And it's wonderful to be home early on Valentine's day. And you saved three twenties.

So what is the problem?

Can it be that winning this prize came too easy? Do you miss the thorns and foxes and wolves?

I'll buy roses today. It's Valentine's Day and we humans communicate through a dance of music and symbols. It's a beautiful game and we love to play.

But it might be time to take a good look at this symbol. Maybe we live in the future now and need a new quest. Wide-body planes fly in from Ecuador carrying genetically-engineered long-stems by the perfect bushel; trucks drop them off, sealed and barcoded, on every streetcorner.

Living flowers in a crystal vase can still make a room glow. Great - let's have 'em every week!

But maybe, come Valentine's day next year, I'll head out down the crooked alleys in search of something new. Something beautiful and flawed, hand-made or hard-to-find. Something that's more than a symbol of romance past. Something that writes a new chapter in a love story that never grows old.

back to the blog