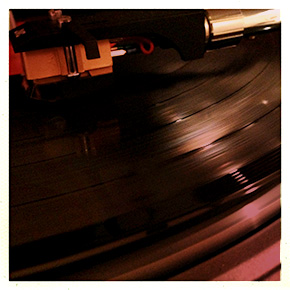 I just bought, on vinyl, an album by Darling Cruel. It cost me four bucks, this old record pressed in 1988. The sleeve's corners were bent, but it was still shrink-wrapped: sealed airtight in shiny plastic. Twenty-one years old and it had never been played. I slipped a knife in, split the wrapper, pulled out a perfect, glossy black record.

This is a crazy album and before it was ever released some people believed Gregory Darling would be the next big thing. The record company spent a fortune recording this. Bombastic, melodramatic art-rock pop with all its gothic sins: big orchestras, shrieking guitars. Glittering gems intermingled with ambitious disasters. Darling's voice like a mad metal prince.

The release of his baby to the public didn't play out the way Gregory Darling dreamed, but what terrible beauty is here. He deserves better than whatever fate has made for him. Axl Rose, for one, owes him everything.

I love buying virgin vinyl like this that has never been played. You can't get closer to music without being there. Perfect, just perfect. Shiny and pristine - and richer and warmer than a cd or ipod. These soundwaves are 100% organic. They have never passed through a computer, never been digitized. Straight from the mad genius's mouth, through his mike and etched in wax. Look at the record and you can see them, those same vibrations. Made by hand and blood and breath.

But here lies the real cruelty. The first time you set the needle down you know you're destroying it, just a little, just a few atoms with each play. Each time that diamond glides across the surface, you are stripping away the music. Slow but certain destruction. And with a record like this – so obscure, so weird and flawed and forgotten – it's possible this is the last unplayed, pristine copy on earth. This very record playing in my headphones.

But records are meant to be played.

Before I dropped the needle on this record, it was dead and gone. Now, for this one moment, it's alive.

back to the blog